Abalone Disease
Abalone Viral Ganglioneuritis (AVG), also known as abalone disease, is a viral disease which affects the nervous system of abalone and results in curling of the foot, swelling of the mouth which leads to weakness and death of abalone. AVG has no known effects on human health.

22 July 2021
The Control Order was re-signed by the Chief Veterinary Officer on 16 July 2021, with no changes made to the Control Area.
A routine surveillance dive of Yumbah intake pipes and surrounds was completed on 14 July 2021 by Fisheries Officers. Samples taken all testing negative.
AVG was confirmed in suspect abalone collected in Bully Cove / South Bridgewater reef code on 9 July 2021 by commercial divers. This reef code is within the Control Area.

10 July 2021
From Saturday 10 July 2021, the southern boundary of the abalone viral ganglioneuritis (AVG) Control Area has been reduced offshore to about 40 metre depth to allow increased commercial and recreational fishing, where the Control Area no longer applies. In addition to the offshore boundary being reduced, the eastern boundary has been adjusted to align with the Cape Grant landmark.
A Control Area remains in place from about a kilometre west of Cape Bridgewater lookout to Cape Grant in the east, where AVG has been found.
A precautionary Fisheries Notice remains in place which restricts fishing, boating and diving 500 metres around the aquaculture farm near Narrawong.

Disease has not been detected on any Victorian aquaculture sites.

3 July 2021
A small extension to the western boundary of the Control Area, taking in Bridgewater/Bully Cove reef code as a new buffer area, came into effect at 12:00 am on 3 July 2021. This followed the detection of AVG in abalone collected during surveillance dives at Seal Caves reef code on 30 June 2021. Restrictions within the new CA remain unchanged (see map below).

26 June 2021
As of the 26 June, boating, diving and fishing resumes in Portland and Discovery Bay in time for the first school holiday weekend with the abalone disease Control Area reduced in size. The new Control Area – which spans from the western tip of Bridgewater Bay to Cape Sir William Grant some eight kilometres west of Portland – is effective from 12am Saturday (26 June).
Fishing and boating restrictions no longer apply east of Cape Grant through to Narrawong (which includes
Portland) and Discovery Bay in the west. 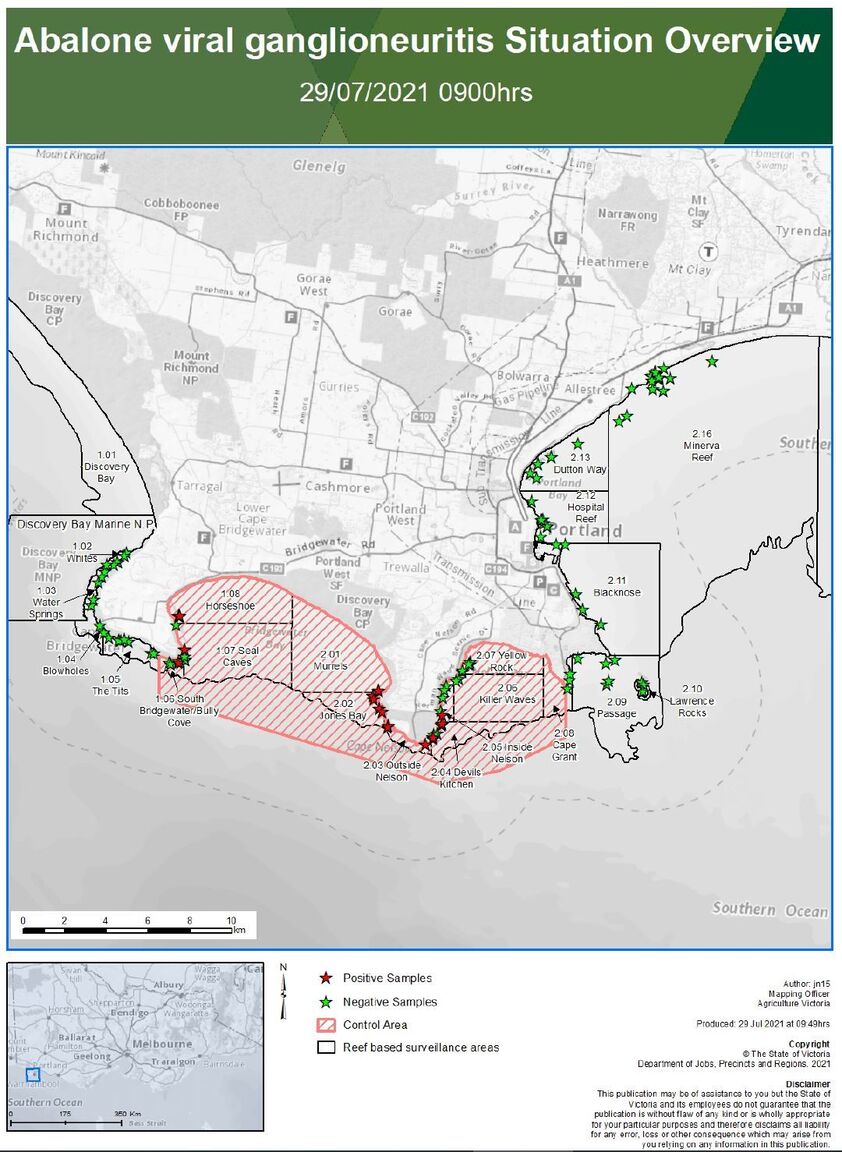