"I may get cold and wet, we may catch little, but every day is the best day ever, sorrounded by the beauty and mustery of nature."
Gippsland Lakes Fisherman

Commercial net fishing has been banned in Gippsland Lakes.

The Gippsland Lakes has been professionally fished since the late 1800s, and many of the fishing families have been fishing the lakes for generations. Some current fishers are fifth and sixth generation Gippsland Lakes fishers. However, as of the 1 April 2020, all of the 10 remaining Gippsland Lakes net fishers packed up their nets and have exited the fishery.

The Gippsland Lakes fisheries make up an important part of the fishing industry based out of Lakes Entrance. Lakes Entrance is the largest fishing port in the south east of Australia, and contributes significantly to economic prosperity and employment in East Gippsland.

Where is the Gippsland lakes fishery?

​Like all Bay and Inlet fisheries, Gippsland Lakes fishers catch a mix of species, using a variety of fishing gears. Gippsland Lakes is the only remaining professional bream fishery in Victoria. Black bream is a popular table fish, and alongside tailor, carp, yellow-eye mullet, school prawns and dusky flathead constitute the majority of seafood from the Gippsland Lakes in recent years. In 2016/17, the fishery produced 316 tonnes of seafood for the Victorian seafood consumers.
​
See the catch for each major species caught in Gippsland Lakes between 1978/79–2017/18 here.

How are Gippsland lakes fish caught?
​

As of the 1 April 2020, commercial net fishing has been banned in Gippsland Lakes.
Gippsland Lakes Fishers used highly sustainable methods to fish. One or two fishers man an open 6-8 metre boat, with some fishers working in a team of two boats, sharing the catch. Just over half the catch is caught using mesh nets, a third is caught using haul seine nets, and stake nets are used to catch prawns. The nets are mostly hauled manually as has been done since the fishery began. 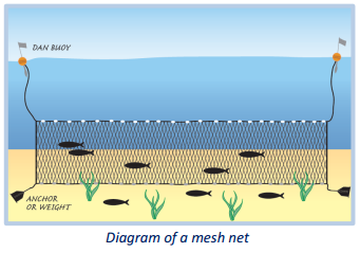 Mesh nets are used to target bream, flathead, mullet, luderick, tailor and silver trevally. Mesh nets are one of the oldest forms of fishing and are highly selective. A mesh net is a panel of net that is held vertically in the water. It is a selective way of fishing because the mesh size and the way the netting is constructed determines what size and species of fish is caught.  Fishermen in Gippsland Lakes use a range of mesh nets depending on the season and what they want to catch.  Knowledge of fish movements is vital so the net is set in the correct position. The nets are set at dusk and fished at dawn, when the fish are hand sorted. The survivability of undersized bream caught is over 90% (Grixti et al, 2010).
Stake nets target prawns. The net is staked by the wing ends across the current, and uses the current to open the net and wash the prawns in. The maximum spread of the net is 30 metres across.

How is the GIPPSLAND LAKES Fishery Managed?

The Gippsland Lakes Fishery is limited to 10 transferable licences.

There are other licence classes also entitled to fish in the Gippsland Lakes, such as Eel licences, crab and bait fishers and this can result in some confusion of identification of fishing gear amongst the community. All gears, fisheries and rules are set out in the Victorian Fisheries Regulations 2009.

The Gippsland Lakes Fishery operates under strict government-regulated management arrangements, and with a voluntary Code of Practice.

The government restrictions are on:
The East Gippsland Estuarine Fisherman’s Association have a Voluntary Code of Practice which includes:
Fishers in the Gippsland Lakes also operate under the Victorian Bay and Inlet Fishery Association (VBIFA) Environmental Management System (EMS), “A voluntary, industry-driven initiative”. The EMS is was developed to help fishers navigate ecological, social, political and economic challenges and manage the risks that they present. And it is designed for and by primary producers (such as commercial fishers) who have the knowledge and expertise to develop and implement best practice that meets both environmental needs and food production needs.
Find a copy of the VBIFA EMS - here. 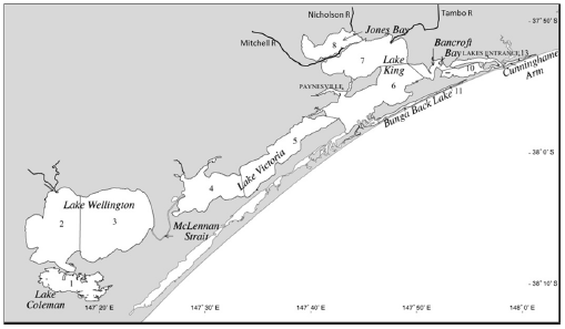 Bay and Inlet fisheries are naturally variable fisheries, and highly dependent on environmental conditions outside the system. The environmental conditions in the Lakes, such as water temperature and salinity (fresh water flows, rainfall), also fluctuate which affects fish abundance. Thus, the ability to target a diversity of species in Gippsland Lakes is important for the viability of the fishery.

Further, the 2018 Status of Australian Fish Stock (SAFS) reports can be found at www.fish.gov.au. They confirm that the Gippsland Lakes fisheries are in good shape overall - species specific reports below.
A scientific study, published in 2014 by Fisheries Victoria, looked at the impact of net fishing near river mouths in Gippsland Lakes. It found that professional fishers mostly catch small quantities of bream in a fishing event – less than 50kg. Large catches of bream are not correlated with the spawning season. The report concludes that “commercial fishers do not cause a significant impact on the spawning success or subsequent recruitment to the fishery” Green (2014).