Unfortunately, there have been a lot of recent changes to the Port Phillip Bay Fishery which has reduced Victorians access to local and sustainably caught fish. In 2016, 33 of 43 access licences were bought back by the Victorian State government as a result of their 2014 election decision to remove netting from the Bay. In 2022, only 8 licences will remain with the netting entitlements removed.

Where is Port phillip bay?

​Like all Bay and Inlet fisheries, Port Phillip Bay fishers catch a mix of species to sell, which has provided a great diversity of species for consumers. However, with only ten fishing licences remaining, and as netting is phased out, the mix of fish available from Port Phillip Bay is changing.

King George whiting has always been a key target species for Port Phillip Bay fishers, and the Bay has historically provided the highest volume of King George whiting from Victorian fisheries. Southern calamari, snapper, flathead, garfish, yellow-eye mullet, gummy shark, and flounder all made up significant proportion of the catch in 2018/19. Anchovies and Sardines make up over 50% of the total catch in Port Phillip Bay.

Figure identifies the changes in professional fishing catches across 4 key species and all licences operating in Port Phillip Bay from 2003/04 till 2016/17, including identifying the number of licences.

What methods are used in port phillip bay?

Port Phillip Bay fishers use highly sustainable methods to fish. One or two fishers man an open boat of approximately 8 metres in length, with some fishers working in a team of two boats, sharing the catch. The main methods of fishing currently are haul seine and mesh nets, with the nets hauled manually as has been done since the fishery began.  Longlines are used to catch snapper in the season. A small purse seine is used to catch sardines and anchovy. 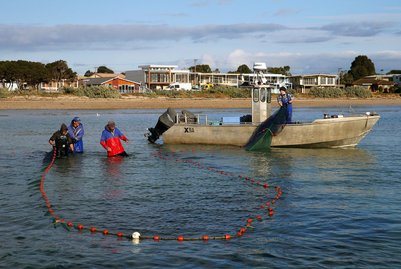 Haul seining is a traditional style of fishing that has been used in Victoria’s Bay and Inlets for over 100 years. In shallow water, the haul seine is deployed, in a place based on fisher knowledge and experience. The haul seine forms an arc, and is used to surround fish and draw them towards the boat, avoiding fish getting stuck in the net, which means the fish are alive once encircled. Then the fish are sorted while in the water. The fish of market value are removed using hand-held dip nets and are placed into the ice slurry box. Non-market fish are returned immediately to the water without harm. Research has been shown that 97% of released fish survive, making the fishing method highly environmentally friendly (Knuckey et al, 2002)
​Mesh nets are one of the oldest forms of fishing and are highly selective. It is a panel of net that is held vertically in the water. The mesh size and the way the netting is constructed determines what size and species of fish is caught.  Knowledge of fish movements is needed so that the net is set in the correct position. Fishermen in Port Phillip Bay use a range of mesh nets depending on the season and what they want to catch 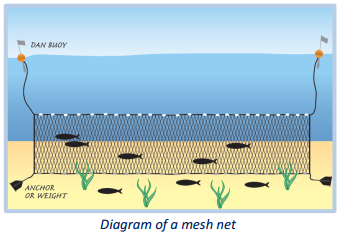 ​​Purse seining requires hunting for schools of fish. In the case of Port Phillip Bay, this is for sardines, anchovy, and sprat. These schooling fish were historically found by looking for birds feeding. The fishers are now helped out with sonar and echo sounders technology. Once the school of fish are located, the boat pays out the net in a circle around the school at the surface. The bottom of the net is then pulled together, creating a purse, with the fish enclosed. With the purse alongside the boat in the water, the fish are then scooped out either by hand or with the use of a hydraulic boom, and emptied into fish bins. The fish are iced, and also salted if going to be used for bait. The fishery is highly sustainable with no bycatch.

How is the Port phillip bay fishery managed?

The number of Port Phillip Bay fishing licences in 2019 was 9 transferable licences. In 2022 there will be 8 licences with all types of netting removed from the licence. In 2018, Corio Bay was closed to commercial netting.

Bay and Inlet fisheries are naturally variable fisheries, and are highly dependent on environmental conditions outside the system which affect the abundance of target fish species from year to year.